White (made of clouds)

The Candle Maker is the benevolent immortal being and a ancient, immortal god in charge of keeping balance between the Land of the Remembered and the Land of the Forgotten, as well as creating the candles of life that embody each and every living, mortal being's and every living, mortal things life and time on Earth. He resides in the Cave of Souls, the link between the all realms.

He is a large and towering bell-shaped immortal being that appears to be completely and entirely made out of glowing gold golden candle wax. He always has a cheerful, smiling expression on his face and his hair and beard are made compeletely out of soft, fluffy clouds. Around his neck he wears a large beaded necklace made of stone that resembles those of a priest or a monk, and some of his beads resemble skulls. His necklace also has a large stone emblem similar to a witch's knot. His robes appear to be made of glowing gold golden candle wax. His flesh is made entirely out of glowing candle wax.

He is a jolly, upbeat, cheerful, wacky and fun-loving individual who treats others with kind warmth. He is also quite easy going, laid back and a bit of an oddball and eccentric but will still try to follow the rules to ensure that balance is maintained. However, he may be willing to slightly bend a few rules in order to help souls and spirits in need. The Candle Maker is also a very friendly, sweet, very loving, very caring, very benevolent, compassionate ancient, immortal god.

The Candle Maker gets along well with almost everyone he meets. He also knows all the names of every mortal being in the world due to his role in life and gets along very well with all good kind, souls and good spirits.

It is Candle Maker's best friend, it always accompanies him to anywhere he goes and helps him in his task of guarding the souls of all living beings.

Candle Maker is very friendly with Puddle and does not hesitate to greet it when he sees it. Bearing in mind that Puddle is made up of the tears of La Noche [2], but does not seem to reside on her Land, it can be supposed that Candle Maker has given it asylum in the Cave of Souls.

It is known that the two are good friends, although they have not been seen to interact much on the screen. Candle Maker is aware of how temperamental she can be, and does not seem him concerned when she shows it. Near the end of the film, he hugs to La Muerte and Xibalba with a smile.

Once he had "a thing" for her [3], but currently supports the relationship of La Muerte with Xibalba.

They have not been seen to interact much on the screen. At one point the Candle Maker asked if it could slap to Xibalba after La Muerte and Carmen; although his tone is more comical than hostile. Candle Maker is aware of the cheating nature of Xibalba, and although he is willing to help mortals harmed by the tar god, he does not stop considering him a friend. He rejoices for the reconsiliciaon of Xibalba with La Muerte, proving he does not hold a grudge against him for his trap in the bet with she. 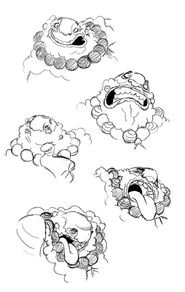 Retrieved from "https://bookoflife.fandom.com/wiki/Candle_Maker?oldid=10234"
Community content is available under CC-BY-SA unless otherwise noted.