The Medal of Everlasting Life

Chakal's Cave in the Land of the Living (before)

Chakal is the main antagonist in the film, The Book of Life, he is a dangerous bandit king who kills anyone who gets in his way.

Chakal is a wicked and ruthless bandit who terrorizes Mexico and commands a fierce army of banditos. He has razor-sharp teeth or razor-sharp fangs, he carries two giant, monster shark shaped-swords, his name alone strikes fear and terror in the hearts and minds of all mortal beings and all mortal living things, an his mere presence and his army of banditos sends everyone and everything running for their very lives and for the hills. He intimidates everyone, though is defeated in the end.

He is a very evil, insane, determined, power-hungry, violent, vicious, wild, predatory, belligerent, murderous, and dangerous man. Once he was a normal man, but after losing the medal, he lost his sanity, becoming a threat to anyone who got in his way to recover what he considers to be his.

Chakal was mentioned to have battled Captain Mondragon who was the late father of Joaquín, it is also known that he stole a legendary medal from Xibalba and Chakal risen to become the king of bandits but after Xibalba stole it back, Chakal's hatred got to him and since then he's been wanting to get it back no matter what, he also was able to build a whole amy of bandits and began to terrorize all Mexico such as San Angel, home to both Manolo, Maria and Joaquín.

Search For the Medal

Even though he lost his medal to Xibalba, he was still nearly impossible to injure. Despite this, he still desired the medal in order to become completely invulnerable again. Therefore, he was ready for a full scale invasion on the town San Angel, from which the hero Joaquín and protagonist Manolo were from, when he discovered that Joaquín was the current owner of the medal. He punched Joaquín over to the town graveyard, shocking everyone.

He launched his bandits on to the town, where they ravage and pillage. Manolo's father, Carlos, tries to hold them off, only to be killed by Chakal. He then continued his quest for the medal.

Unbeknowest to him, Manolo had just gained the favor of the three gods; La Muerte, Candlemaker, and even Xibalba. The hero returned to life with an army of his lost relatives, and quickly defeated the bandits. Now it was only Chakal, who faced off against Manolo and Joaquín.

After a long battle, Chakal took Maria, and climbed up a bell tower. Manolo, along with Maria, face off with him for the last time, knocking him off the tower. He is then positioned under the bell, and is tied up by the heroes. However, in one last stand, Chakal lights up some bombs he had strapped to his chest threatening to take the entire city down with him. Manolo and Joaquín held him down, then Joaquín warns Manolo that the column holding up the bell is about to collapse. Manolo sacrifices himseld and kicks Joaquín and the column out. The bombs explode inside the bell killing Chakal in a huge detonation. 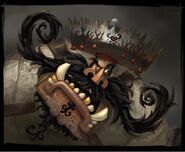 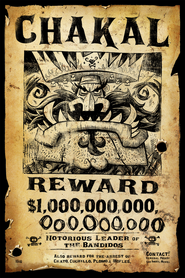 Chakal with Chato during the credits.

Retrieved from "https://bookoflife.fandom.com/wiki/Chakal?oldid=10336"
Community content is available under CC-BY-SA unless otherwise noted.