El Chamuco is made out of boiling lava, with orange eyes and blue skulls for pupils. He has a pair of huge membranous wings [3]. He wears black gloves with red flames , a conquering armor adorned with multiple small skulls and red stars, and a metal crown with wings that sprout from both sides, crowned with striped candles lit with blue flames and small red and black skulls (which have goat horns and small silver crowns). El Chamuco has has black hair, moustache and beard. El Chamuco bears a strong resemblance to his younger brother Xibalba, although he gives the impression of being more robust.

He is known to be even more powerful than Xibalba [4], besides being completely evil and ruthless. 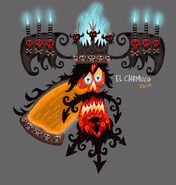 Retrieved from "https://bookoflife.fandom.com/wiki/El_Chamuco?oldid=10341"
Community content is available under CC-BY-SA unless otherwise noted.