"The Book of Life"

Plomo is one of the tertiary antagonist in The Book of life he is also member of Chakal's army.

Plomo was first seen with the group of bandits that attack San Ángel at midnight he tried to kill Manolo with his spike wrecking ball but was stopped by Joaquín, Chato orders him to attack the hero but Joaquin was able grab his spike bell and was thrown aside, he and the rest of the bandits retreat after Joaquin defeated them.

Later he was seen chasing the two boys but Carlos knocks him out in one push.

Sometime later he regroups with the others in battle and after Chakal gets defeated, he runs away with the rest of the army when Chato orders them all to retreat 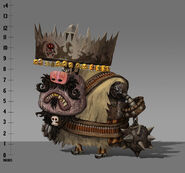