The Book of Life is the journey of Manolo, a young man who is torn between fulfilling the expectations of his family and following his heart. Before choosing which path to follow, he embarks on an incredible adventure that spans three fantastical worlds where he must face his greatest fears. Rich with a fresh take on pop music favorites, The Book of Life encourages us to celebrate the past while looking forward to the future.[3]

Mary Beth, a museum tour guide, takes a group of children on a tour of Mexican folk myths and legends. She tells them the story of the Mexican town of San Ángel from the Book of Life, which holds every story in the world.

The spirits La Muerte, ruler of the Land of the Remembered, and Xibalba, ruler of the Land of the Forgotten, set a wager on San Ángel's Day of the Dead festival after seeing two best friends, Manolo and Joaquín, competing over a girl named Maria. La Muerte bets that Manolo will marry Maria, while Xibalba bets on Joaquín. If La Muerte wins, Xibalba can no longer interfere in mortal affairs; if Xibalba wins, he and La Muerte switch realms. However, Xibalba cheats by giving Joaquin his Medal of Everlasting Life, which grants the wearer invincibility. Maria frees a herd of pigs from being slaughtered, causing her father to enroll her in a boarding school in Spain the hopes of removing her rebellious streak to become a proper lady instead. While saying their goodbyes, Manolo gives her a baby pig from earlier and she gives him a guitar engraved with "Always play from the heart" while Joaquín keeps her hat that flew off the train.

As an adult, Manolo's musician dreams are suppressed by his father Carlos, who trains him to become a bullfighter like the rest of their family, while Joaquín becomes the revered town hero with the Medal's aid, something he had aspired to since his father was also a hero. On the day of Maria's return, a celebration is held culminating in Manolo's first bullfight. Manolo defeats the bull but refuses to kill it, dismaying Carlos and the crowd but impressing Maria. That night, Maria is pressured by her father, the mayor of San Angel, to marry Joaquín so that he will stay and protect San Ángel from the bandit Chakal, though she is conflicted by her feelings for Manolo. Maria and Manolo meet before dawn to profess their love for each other, but they are interrupted when Xibalba sends a two-headed snake to bite her once, rendering her unconscious. Devastated by Maria's assumed death, Manolo is tricked by Xibalba into being sent to the afterlife: the snake bites him twice, killing him.

At the Land of the Remembered, Manolo reunites with his mother Carmen and his illustrious deceased family members. They travel to La Muerte's castle to seek Maria, but only find Xibalba, who explains the bet to Manolo and that the snake put Maria in a coma, but killed him. When Maria awakens, she learns of Manolo's death and solemnly accepts Joaquín's proposal. Manolo, Carmen, and Luis, Manolo's grandfather, travel to the Cave of Souls to reach La Muerte. They meet the Candle Maker, who oversees the lives of everybody in the living world. After seeing that Manolo's story in the Book of Life is blank and can be rewritten by Manolo's own actions, the Candle Maker takes them to the Land of the Forgotten. Manolo finds La Muerte and exposes the cheating to her. Furious at Xibalba, La Muerte lectures him before another deal is negotiated; Manolo's life will be returned if he completes a challenge Xibalba sets him, but if he fails, Xibalba will rule both lands and Manolo will be forgotten. Thinking that Manolo's fear is bulls, Xibalba manifests every bull the Sanchez family ever fought, which merge into a giant one for Manolo to defeat.

In the living world, Chakal, who previously owned the Medal, leads his army to San Ángel to find it. Chakal kills Carlos, who joins the deceased to watch Manolo fight. Manolo, realizing his fear is actually being himself, again refuses to deliver the finishing blow, instead singing an apology to the resentment-filled spirit asking it to forgive his family's transgressions, which it does by peacefully dissolving away. Impressed, the deities grant Manolo his life back and send him and his family's spirits to the living world to defeat Chakal. Manolo is almost killed again when Chakal blows them both up, but is saved by the Medal which Joaquín pins on him at the last second. Joaquín returns it to Xibalba and resolves to be a hero of his own accord, while Manolo and Maria wed happily as Xibalba expresses his love for La Muerte once more, which the latter accepts and reutrns.

Back in the present as the children leave the museum, Mary Beth and the security guard shown earlier reveal themselves as La Muerte and Xibalba. The Candle Maker then tells the viewers to write their own story. 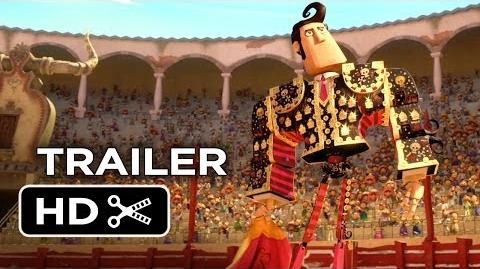 In June 2017, Gutierrez and Reel FX Animation announced that the development on the sequel had begun.

Retrieved from "https://bookoflife.fandom.com/wiki/The_Book_of_Life?oldid=10350"
Community content is available under CC-BY-SA unless otherwise noted.